UFC Fight Night 131 was live from Utica, NY. The night started with a wacky finish where Jarred Brooks knocked himself out with a slam, and ended when Marlon Moraes put a quick end to the hype of Jimmie Rivera. The card also had one of the weirdest fight cancellations of all time where Jessica Aguilar was supposed to fight Jodie Esquibel but medically pulled out due to chapped lips. A fun night, lets get into the main card results.

Well that was over before it even started. A battle of on fire bantamweights, both men met at the center and threw range finding jabs. Before either man landed a punch, Moraes fired off a left head switch-kick, flattening Rivera. Moraes jumps on top and lands s couple right hands before being pulled off. Rivera’s undefeated streak was ended violently and decisively.

The first round was all Gillespie. Taking Pichel down and dominating him, pinning him to the mat and landing short punches. Landing 4 takedowns in the round, and attempting multiple submission attempts, he just was all over Pichel. He eventually ended the round with Pichel in a tight anaconda choke.

Taking Pichel down within the first minute in the center of the cage. Pichel worked his way to the cage, and standing up, but Gillespie is latched onto his back. Pichel rolls, and gets Gillespie back into half guard. Gillespie gets to mount in the last minute of the round, Pichel rolls, Gillespie takes the back. Pichel tries to roll again, but is trapped arm-triangle. Pichel holds on for a few seconds, but taps out.

Harris takes the center cage and forces Spitz outside, but the 6’7 Washington Native fires off kicks to push Harris back. But, Harris doesn’t retreat for long, pushing forward but not landing anything serious until he lands a quick left. Spitz retreats and looks for the exit while landing body kicks. He gets his hands up to block a Harris head kick. Harris then starts fires kicks at Spitz. The rest of the round is back and forth.

The second starts out with Harris resuming his push forward. Spitz looks like he hurt his arm, as he only throws kicks and is barely move his right arm on exchanges. Harris doesn’t go after the injured man as much as you thought the would. Easily shrugging off a takedown attempt, but around 2 minutes left, the crowd starts giving it to Harris. With around 20 seconds left, Harris seems to have a change of heart. He clocks Spitz with a bomb of a left hand, that came over the top of a kick attempt. Spitz wobbles back as he is stalked by Harris, who puts him down with a flurry of punches. Spitz tries to save himself, but Harris is just pushing through with ground and pound. After a few moments, the ref steps in and stops the contest.

In a match up of two veteran fighters, no one saw it going the way it did. Ellenberger took the early advantage after catching a Saunders kick. Pushing him back to the fence. Saunders fires off a quick combination, as Ellenberger gets inside to the clinch. Saunders lands a few knees to the body, but he jumps into Thai Plum and pulling him off the cage. He pulls Ellenberger’s head down and lands a beautifully placed left knee. The knee hit the floating rib/liver, dropping Ellenberger to a knee. Saunders lands a couple small punches, but it’s over. 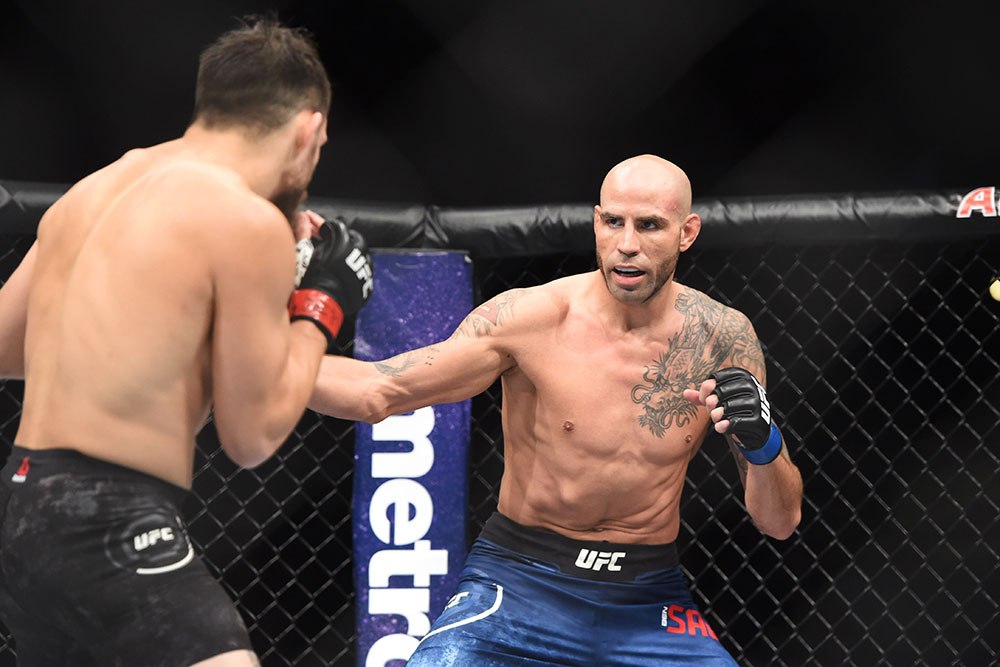 Teymur starts off the more active fighter. Landing leg kicks and pressing when he sees fit.  He keeps this strategy up for most the round, as Acre wants to take his time. Acre starts finding a home for his left hand and hopping into a clinch that was quickly reversed. But, he starts to ramp it up late, flurrying Teymur with a strong combination. He keeps him on the retreat thanks to the left hand.

Round two is more of the same. Arce is doubling Teymur on strikes. Pushing forward with that big left hand, as Teymur continues to hunt for a head kick. Teymur attempts a clinch but fails, he tries again and eats a knee for his trouble. He then attempts a single leg takedown, but has to give it up as Arce is locking on a guillotine. Arce lands a jab, and fires a spinning back fist, but Teymur ducks out of the way.

Teymur comes out in round 3 landing leg kicks, but it’s more of the same from Arce. He staggers Teymur with a cross early.Then about half way through the round, Arce lands a huge takedown, quickly taking the back. He locks on a body triangle. As Teymur tries to sit up, Arce wraps his arm around his neck and locks on a choke. Teymur fights, even giving a thumbs up, but eventually is forced to tap.

A back and forth first round, Villante thudded Alvey with leg kicks. Catching him with a big right hand, Villante had the early part of the fight. Alvey was trying rebound power attacks off the cage. Villante lands a big kick to Alvey’s stomach, and fires off a body hook. Alvey then takes a cup shot, but wants to get right back to work. With 10 seconds left, Alvey put Villante down with a short left arm. He bounces up as Alvey swarms, being saved by the bell.

Villante bounces right back from the knock down in round two. Walking down Alvey, chopping away with leg kicks and right hands. Alvey hits a left straight off the cage, but doesn’t land much else. Villante landed a big left hand that snapped Alvey’s head back. Again the last 10 seconds, Alvey attempts to flurry, but Villante lands a crisp right just before the bell.

Both men getting tired, but Villante continues his gameplan. Alvey again comes off the fence, this time with a left,right combo, but is answered with a looping left.  The rest of the round is anyone’s guess. Alvey lands a left hook in the final minute that probably won him the fight, as Villante just bounced strikes off the arms.