UFC Fight Night will emanate from Liverpool, England. The third weekend in a 5 straight fight week stretch, it’s a fun time to be a fight fan. There will be a big fight setting up the future for the welterweight division between Stephen Thompson versus Darren Till. The winner will be in the title conversation once the interim title is settled in June, and when Woodley comes back. Neil Magny takes on newcomer Craig White in his UFC debut. He is stepping in for injured Gunnar Nelson.

Stephen Thompson vs. Darren Till

The homecoming of Till might not be a pleasant one.After missing weight, he will have a restriction of 188 pounds on fight night. Wonderboy issues a major challenge for the 25 year old. Coming off the win over Donald Cerrone, Till hasn’t faced much major competition out of that. Mostly fighting mid tier guys to get here, Till can push his way to a title shot with a win here.

The undefeated Liverpool native has a big left hand, which he sets up nicely with a flurry of jabs, putting his opponent to the cage. This is where he can really do damage. Having good takedown defense, him and Thompson should both look to keep this fight standing. 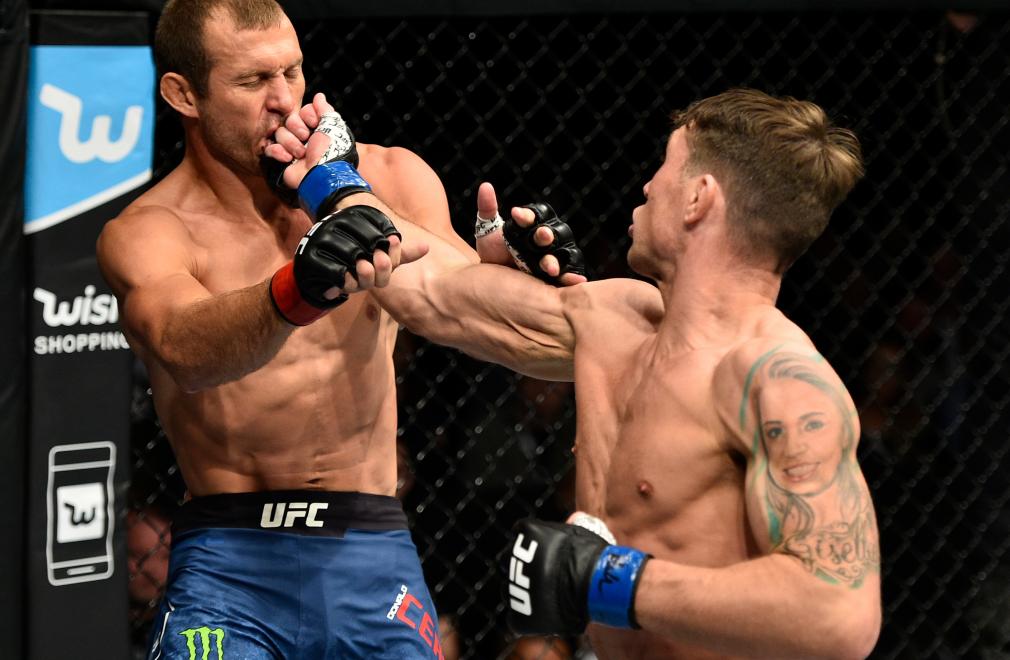 Thompson is a resident here at the top of the division, with his flashy kicks and quirky style. Having 2 fights with champion Tyron Woodley, he wants his rematch, but he will have to earn it. He needs to keep winning due to the losses to Woodley for anyone to grant him a third fight.

Till is a high risk-low reward opponent for Thompson. He will be trying to counter Till and that big left hand all night. Wonderboy will just circle and strike from the outside as much as he can.

Magny, the long time veteran, was scheduled to face Gunnar Nelson. But with his injury, he gets to welcome a newcomer in White. Magny is a workhorse in the octagon, fighting more than 3 times in 4 of the last 5 years. He is coming off a win over former interim champ Carlos Condit. Magny’s long limbs makes getting inside his range and establishing a pace difficult. His clinch is very active and once he gets his opponent on the ground, he is looking for a tap-out. Using his long limbs to his advantage.

White is taking this fight on five weeks notice. The UFC newcomer is 14-7 with most of his wins coming by submission. Kicks are a focal point of his game, as he holds a blackbelt in taekwondo. I haven’t seen his takedown defense, but from all reports it is abysmal. His ground game isn’t much better, looking for guillotines and laying there. Hopefully they trained some ground in the last 5 weeks.

The 24 year old Englishman, Allen will be fighting his fourth fight with the promotion. After failing to fight in January, due to failing to get a visa for a bar fight, is fighting in his home country. He is arguably the best on the ground. An excellent scrambler with crushing elbows from the top. His boxing still needs work. He is quick to hop out of the pocket, and stays outside of range so he has to move in twice to strike. Allen also lets his opponent off by not advancing to the cage, leaving room for them to circle.

Burnell is also only 24. The BJJ black belt is 1-1 in the UFC, but he is a legitimate prospect at featherweight. Possessing solid wrestling to go with his jiu-jitsu, he can hang with the best in the division on the ground. His hands are still a little suspect, but they are improving, staying in the pocket and keeping his eyes up. He should try to keep this one on the ground.

Knight rocketed up the rankings after a 4-0 start to his UFC career, but he has suffered 2 straight losses. Super aggressive, he will charge forward, throwing the entire time, and look for submissions any time the fight hits the ground. His wrestling is middle of the road, but he will work for everything. Unafraid to trade and bang, he will go 110%, until he tires himself out by the 3rd.

Finnish national champion in Greco Roman and freestyle wrestling, Amirkhani is a wrestling machine, but that’s about it. Usually trying to catch his opponent early, 9 of his 13 finishes have come in the 1st round. Having gas tank issues just like Knight, he has faded in most of his fights that have gone past the first round. He doesn’t have much in the way of striking, mostly trying to close space for a takedown. Having pretty good submissions and defense, it should be his primary gameplan.

Spicely, a BJJ black belt, isn’t a great athlete but makes up for it with slick submissions. Only landing 25% of his takedowns, he is stubborn, as he lands 2.5 per fight. His striking is only there to get close enough to try to get the fight to the ground. He has a very simple, but effective gameplan. Get it to the ground and latch onto something.

Stewart, a London native, has a background in taekwondo, but is best in the clinch. He puts his opponent on the cage and works takedown attempts, exploding off for big strikes. This is effective, but also tires Stewart out. Continually trying to drag his man down, and throwing huge strikes. His wrestling is good enough to stop quick shots, but he isn’t anything to get excited over. His game plan may work into Spicely’s favor, but i would like to think his corner will have a better idea.