Well the mega card of the summer is here, but not without some controversy. Romero missed the 185 limit twice, the second only by .2 of a pound, putting the title match in jeopardy. Otherwise all fights are scheduled to go on as planned and even without that fight, this card is stack to the brim. Welterweights Colby Covington and Rafael Dos Anjos meet for the interim Welterweight Title, and a chance to fight true champion Tyron Woodley. Even the undercard and prelims have interesting fights.

In a rematch in which Whittaker won, despite having his lead knee damaged in the first minutes of the bout. It showed his toughness and grit, but his chin is what shown through the most. Eating bombs from Romero and kept coming, he showed the heart of a champion in their first meeting. Now healthy, he is the overwhelming favorite, and it’s not hard to see why.

He will be able to push the pace and tire out the Cuban. His footwork should be a highlight of this fight. Working angles and dodging takedowns, he should have a great advantage mentally and physically in this fight. 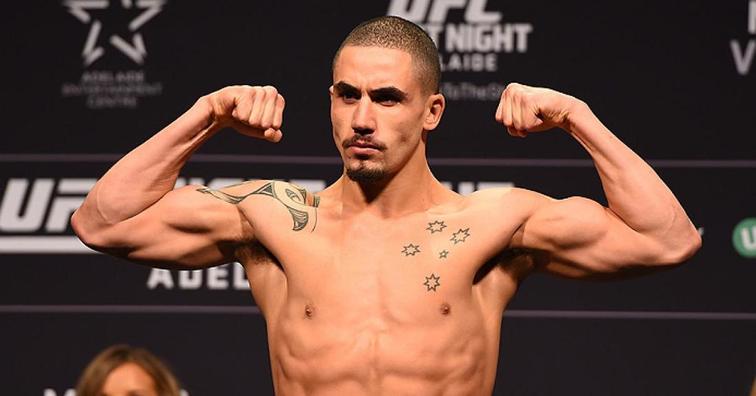 Romero has missed weight for the second straight fight, both title opportunities. He took the fight against Luke Rockhold on short notice after Whittaker came down with a life threatening staph infection. Knocking Rockhold out in the 3rd, he gained the opportunity to rematch Whittaker for the belt. But, now missing weight he has all but lost his chance to wear the gold.

Word is still out if this fight will even go on (money is that it will but won’t be the main event). No matter what the cause, Romero has no excuses this time. He had a full camp and was healthy the entire time. Looking at the fight, Romero has to somehow not gas out as he did in the first match. The olympian has had terrible issues with it throughout his career, and Whittaker has already proven he can win against Romero, even not healthy.

Dos Anjos has been a mainstay in the UFC. A former lightweight champion, Dos Anjos has proven himself time and time again. The more well-rounded fighter, he will enjoy a speed and cardio advantage over Covington. Dos Anjos has become more passive in his move up, but it’s still there if you watched his war with Robbie Lawler.

He let Lawler keep coming, but when he saw his moment he sprung, flurrying Lawler all the way back to the cage. But against Covington I see him countering Covington’s pressure and keeping him at range. Using his speed and combinations to outmaneuver Colby.

Covington has finally talked his way into a title match. Having a good record (8-1) in the UFC and riding a 5 fight win streak, he has earned his spot, but his mouth gets him the publicity. A throwback to the early days of the UFC, Covington is a wrestling machine. He wants to put you on your back and maintain control, battering you with punches and elbows from the top.

But, his striking isn’t broken. After his match with Maia, where he chose to stand and trade with the BJJ wizard, you see that there is a competent striker in there. Active with leg kicks, he stays in the pocket when trading, but you know a shot is coming eventually. He does have a tendency to leave himself open to counters, and wastes energy with ineffective jumping strikes, which will hurt him against Dos Anjos.

The former bantamweight champion, Holm is 1-4 in her last 5 fights, despite being a headliner in all but one. Her competition has been overwhelming after her sudden rise to stardom. Having to move up to featherweight to fight Cyborg, Holm has gotten the short end of the stick.

Her offense has been solved and used against her, but she finally has a good stylistic matchup. A young aggressive opponent in Anderson, Holm will be able to use her counter punching and kicks to great effect in this fight.

Anderson was supposed to have her debut at UFC 214 for the title, against Cyborg. It probably was in her best interest she stepped aside, but being the only other true featherweight in the division, she will have to fight Cyborg sooner or later.

Beating Holm will fast track that. Anderson a Muay Thai practitioner, is head first at all times. She is going to come right at Holm and fire away. Her inexperience has shown at times, disregarding her corner at times. Anderson could get lucky and hit her with a big bomb, but Holm may just out box her.

The Pitbull, Andrei Arlovski is having a resurgence after wins over Junior Albini and Stefan Struve. After years of irrelevance, he has gotten his career back on track after starting training at ATT. The most surprising aspect of this comeback was his win over Struve.

Going back to his sambo roots, his wrestling came back. His boxing is still very good, and his physical skills have not fallen off a cliff. But, against a fellow boxer, his wrestling will take over the fight.

Tai Tuivasa, 5-2 as a pro boxer and a former rugby player, has the youth and probably the power advantage, but not much else. He sticks from the outside with kicks and right hands, but his biggest strength is when he pins his opponent on the cage.

Unleashing crushing elbows, he dominates his opponents on the cage. His gas tank is not the best, having been gassed multiple times early in fights. He is the favorite, but his youth may hurt him against a vet like Pitbull.

Phil Brooks, or CM Punk as he is better known, doesn’t have much to go off of, but good news is neither does his opponent. Both men losing to Mickey Gall. Punk’s was the better of the two. After engaging, he was easily taken down. He fought to escape for 2 minutes, but it was embarrassing. Hopefully the time off has helped him, but at 39 his chances of making this a full time career are probably over.

Mike Jackson, also lost to Gall, but he didn’t even get to mount any offense . The amateur kickboxer kept Gall at distance, but he quickly shot in, took Jackson down and locked in a choke moments later. Jackson has even less time than Punk in the octagon, but both men being 0-1 means one will be .500 after this fight. I would like to talk more about Jackson, but he really doesn’t have much to go on.

Prediction: Jackson via 2nd Round TKO