UFC 224 from Rio De Janeiro did not disappoint.The Brazilians came out in force and it showed. 11 of the 13 fights ended with a finish, tying a modern day record. We had everything a fight fan could ask for submissions, knockouts and comebacks. Let’s recap the craziness that was this night. 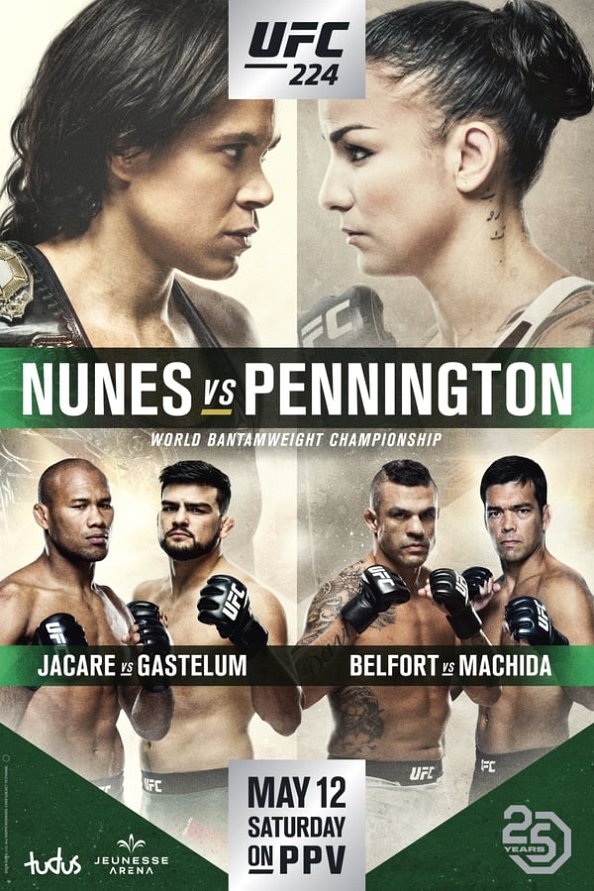 A dominant performance from the defending champion. From the opening bell to the stoppage Nunes was all over Pennington. Early leg kicks opened up Pennington’s defense and Nunes never relented. Nunes battered a bruised Pennington all night long, breaking her nose in the process. Between the 4th and 5th round Pennington wanted to quit, but her corner did not let her. The fifth was more of the same with Nunes on top, battering Pennington. Her nose opened back up as Nunes continued striking. The ref stops the fight shortly after.

A very back and forth contest. The first round was all Souza. Two takedowns in the first led to a very deep armbar attempt where Souza was clawing for the finish. All the work seemed to tire himself out. The second round was all Gastelum. Throwing combinations, dropping Souza with a left cross in the middle of the round. The third round was back and forth, trading bombs. Souza looked exhausted by the end of the fight, which may have cost him the decision.

An under the radar fight that blew up when Dern missed weight by 7 pounds. It didn’t seem to matter though as Dern walked through Cooper with relative ease. Standing and trading with the TUF 23 finalist early in the fight. Dern clipped Cooper with a wide right hook, which was the opening she needed to bully Cooper to the ground. Dern took full mount before transitioning into a rear naked choke.

An explosive fight from beginning to end. Kelleher came ready to fight, but just ran into a buzzsaw that is Lineker. Exchanging combinations throughout the first two rounds, the third round is when Lineker really took control. Lineker locked on a guillotine, which Kelleher reversed putting Lineker on his back, but was unable to capitalize. Seconds later Lineker is on his feet and uncorked a left hook which put Kelleher down for good.

A battle of future UFC Hall of Famers kicked off the PPV. Machida and Belfort both weighing retirement coming into the bout. The first round was slow, both fighters feeling each other out. Machida was the more aggressive fighter, while Belfort sat back and tried to counter. The second round is more of the same. Machida sticking with his kick heavy gameplan. Then out of nowhere a front kick lands flesh on Belfort’s chin, eerily reminiscent of the one Anderson Silva put him away with in 2011.

After the bout, Vitor Belfort announced his retirement. He hangs up the gloves with a record of 26-14-1 and a UFC Light Heavyweight championship reign in 2004 and winning the UFC 12 Heavyweight Tournament at 19 years old.