Just days away from Fight Night Chile, a historic night. After 32 broadcasts from Brazil, the UFC finally moves to another South American country.  A card that originally featured 3 different bouts, has had its share of change. Originally scheduled to face Argentinian, Santiago Ponzinibbio, Kamaru Usman will now be facing dangerous submission specialist Demian Maia.

The originally co-main event, Mauricio Rua vs. Volkan Oesdemir, has fallen through and has been moved to Fight Night 134: Germany. It has been replaced with a Women’s Strawweight bout featuring Alexa Grasso against Tatiana Suarez. Brandon Moreno was scheduled to fight Ray Borg in a Flyweight collision, but Borg had to pull out to take care of his ailing infant son. (Hope all is well, Ray) Now he is taking on Alexandre Pantojaon the FS2 prelims. 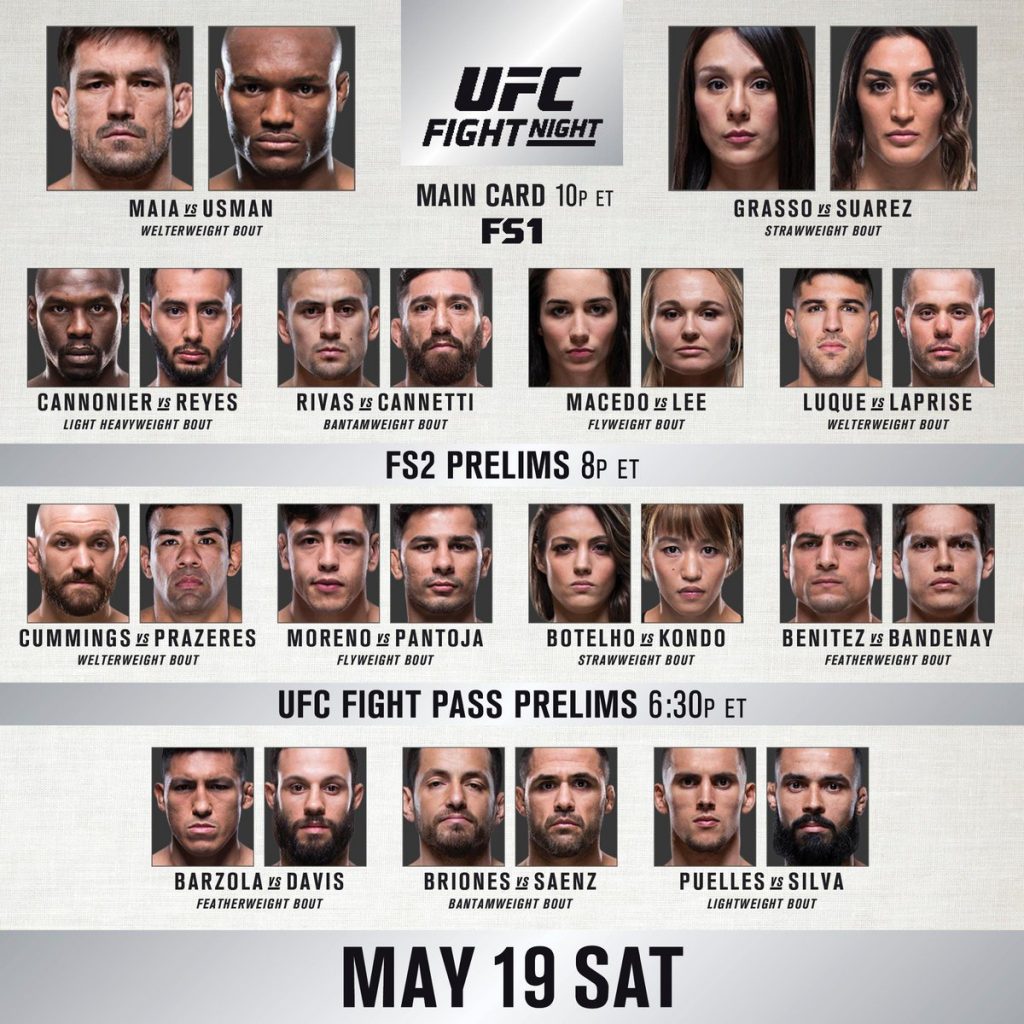 Maia is a long time veteran in the UFC, is coming off two straight losses to top wrestlers in the division. Champ Tyron Woodley and Colby Covington, Maia may be nearing the end of his career. As good as his BJJ is, the physical tools needed to keep the younger, larger, faster athletes on the ground are just not there anymore. Turning 40 just last year, it would seem to signal that this is the last major fight Maia may have if he loses.

Maia, the heavy underdog, will have a tough test as  Kamaru Usman is undefeated in the octagon, 6-0. Winning TUF season 21, Usman has been on a tear since. Putting his wrestling together with his massive strength advantage to smother his opponents. His stand up defense will need work if he expects to advance to the top of the division. In his last fight against Sergio Moraes, before putting him to sleep with a straight right, Usman ate several overhand right from the fighter, who is mostly known for BJJ.

Grasso was the UFC’s hope for a Latin Superstar in the women’s division after her debut win against Heather Jo Clark. But the Guadalajara product seems to lose focus at times, which opens up an opening for her opponents to dictate the pace and range of the fight. After dropping a decision loss to Felice Herrig, Grasso bounced back with a decision win over Randa Markos. She will need to hope her ground game has improved if she hopes to pull out a win against Suarez.

Tatiana Suarez a former bronze medalist in freestyle wrestling at the world championships. She was on track for the olympics before a neck injury and a bout with thyroid cancer put that dream on ice. That didn’t derail Suarez who took that wrestling experience and transitioned over to MMA, winning TUF 23. The southpaw’s kickboxing game doesn’t get nearly as much attention as her wrestling, as she normally utilizes it to get into a clinch position and attempt a takedown. It could come into play if Grasso can stop a takedown attempt, but it shouldn’t be likely.

Reyes is undefeated in MMA (8-0) and tore threw his first two UFC opponents in less than a round combined. An offensive prodigy, the Joe Stevenson product only began his career 3 and a half years ago. The southpaw has outmatched and outmaneuvered every opponent that has been sent his way. Only a BJJ blue belt, he showed off that he can submit people too in his submission win over Jeremy Kimball.

Cannonier throws punches in quick succession unlike anyone else in the division. His head movement could use some improvement when inside, but is very good when range is his friend. Training out of MMA Lab in Arizona, his gas tank will not be an issue. He should be pushing the pace for the full 15 minutes. Cannonier’s true weakness is his takedown defense, but against Reyes he should be fine, outmaneuvering more skilled grapplers in his previous fights,

The newly formed division gets a star of the future here in Lee. The reigning Legacy Fighting Alliance champion and Invicta FC vet has came over to the UFC to give this new division some life. Being skilled in all areas, she is most at home stalking he opponent, eventually cornering them and overwhelming them with a flurry of strikes before jumping into clinch.

Once in the clinch, Lee is her most dominant. Landing thudding knees and quick elbows, Lee is always a threat for a quick trip. With 4 of her 8 wins coming by submission, he ground game is threatening but never dominate.

Macedo is coming back down to her natural weight after getting ground and pounded by Ashlee Evans-Smith at bantamweight. Being a black belt in taekwondo, Macedo is dangerous out in range, but moving inside will start to fluster her. Only being 22, the future is ahead for the MMA Factory product. Her ground game hasn’t been tested much, but she will throw up her legs for armbars or roll for leg locks the second the fight hits the ground. This will be a true test for the youngster.

Prediction: Lee by submission early round 2

A match that was forced up the card due to withdraws. Rivas is the only chilean born product on the slate so he should get a heroes welcome when he comes down to the octagon. Preferring to stay in his home country to train for this fight, Rivas has to pop to put an opponent on defense. but rarely throwing more than three strikes at a time. He relies heavily on his double leg takedowns, but will be reversed on some due to lack of technicality.

Cannetti is a classic brawler and will not hesitate to throw down with Rivas. In his two UFC defeats, he almost finished both his opponents, one with body kicks and another with a big left cross. He is limited in his skill set though, refusing to set up kicks  so his opponent has an easy time countering or avoiding the powerful shot all together.

Prediction: Cannetti with a decision victory.

Luque is a submission artist with skills on the feet to back it up. Stalking his opponent, keeping pressure on is Luque’s gameplan. With the ability to finish it on the feet or on the mat, he will pressure the other fighter until he catches him clean or the fighter attempts a takedown. That’s where the Henri-Hooft product shines.

Laprise us a pace pushing kickboxer out of Canada. Always working angles and never standing still, he averages 5 significant strikes per minute. He has shown deceptive power in his finishes of Brian Camozzi and Thibault Gouti. But that’s not all he has. Very well rounded, Laprise defends nearly 4/5th of all takedown attempts by his opponent and lands at least one a match. He has shown to be capable on the ground but Luque is a different beast.