A surprise Triple Threat match, Nakamura still counts to ten and a decent dance off, Smackdown was a quick watch this week. Coming live from Raleigh, North Carolina, Smackdown finally started to push storylines forward heading to Money in the Bank. Let’s check out what happened this Tuesday.

Samoa Joe starts off the night, bringing a ladder with him down to the ring. He sets it up and climbs up, grabbing the briefcase. Saying it will be a reign of fear and destruction. Joe taunted Bryan, which prompted him to come down and want the match to happen now. Before they started, Cass comes down, crutch under an arm.

He taunts Bryan and informs the men that he will be taking on Samoa Joe tonight, not Bryan. Cass then swung the crutch at Bryan, who ducked it as the crutch strikes Joe. Bryan unleashed Yes Kicks, but Cass stopped it by tossing Bryan into the ladder. Using the briefcase to take both men out. Paige clarifies the comments and tells the men that it will be a triple threat match tonight.

Honestly, it wasn’t the best thing. I tuned out a bit as people were talking to me, so I missed some words. But, it wasn’t holding my attention like it should. Cass is just still bland and adding him to Joe and Bryan just seems to kill the hype. Hopefully he figures it out soon.

Being set up on twitter, Nakamura took on Tye Dillinger. “Perfect 10” took exception to Nakamura using the number or something. It really doesn’t make sense other than Tye uses 10 and Nakamura is counting to 10 for Last Man Standing. Let’s make him fight. AS you might imagine, Nakamura kept counting to ten after knocking Dillinger down, but Tye wouldn’t stay down.

Taunting Nakamura with his “Perfect 10” taunt, then using Shinsuke’s own taunt against him. He fired off strikes, but it wasn’t enough. Nakamura hits a Kinshasa, 1, 2, 3 and your winner Shinsuke Nakamura.

Well, this just was put together because of the number 10. Seemingly rushed and not given time to tell a story besides the 10, Nakamura basically dominated this match. Dillinger still hasn’t gotten over on the main roster, and he has been in the company for a decade now. I get the gimmick, but maybe a change is in order. How can we miss you if you don’t go away?

Lana and Naomi Dance Off

Well, this was a thing. Both ladies brought down their husband’s and their partner. I really don’t have much to say except, Lana dances like a true white girl, and Naomi just introduced a bunch of pre-teen boys to rump shaking, probably giving them a long night of questions. It quickly broke down after Lana and Naomi danced together.

Lana delivering a neckbreaker, then slapping Jimmy Uso. Rusev and English charge, but are tossed over the rope, eating a super kick. Lana is jumped from behind, and knocked down by Naomi. She hits the Rear View, and Lana leaves the ring. I guess Naomi wins?

A pretty standard affair. The New Day took early control, but the Heel team on The Bar and Miz, held control for most the rest of the match. Xavier Woods and Kofi were all over the place, diving and bumping, while Big E was mostly used as the clean up guy.

Xavier Woods tries a big dive but it caught by Sheamus and Cesaro, and put into the barricade. Kofi dodges a Miz clothesline, jumps onto the top rope, diving out onto The Bar, taking them out. Miz is alone with E. He charges but E swoops him up. Hits the Big Ending, 1, 2, 3 and your winners, The NEw Day.

Just came off last weeks Miz TV appearance. Guess Miz and The New Day are gonna feud after Money in the Bank because I don’t either The Miz or whoever the New Day send winning that match. I mean I could be wrong and we could be gearing up for a Woods or Big E singles push. Wouldn’t put money on it, but they have swerved worse before.

Carmella is on commentary as the women come down. Rose gets in the ring safely, but as Asuka gets close to the ring, Sonya Deville jumps her from behind. Rose and Deville are still aligned I guess. Asuka still gets into the ring and starts the match. Rose is all over her early, but it doesn’t last long. A big counter headkick changed the tides.

Asuka beats on Rose, eventually going to the top and hitting a missile dropkick. After a counter pin fight, Asuka locks in the Asuka Lock. Tap, tap, tap and your winner Asuka. Carmella gets in the ring and they face off before Mella leaves.

I guess we haven’t built this match that much, so let’s let Asuka walk through someone. I don’t’ see Carmella winning at Money in the Bank. They have too much invested in Asuka to haver her lose 2 pay per view matches in a row. She will take the title and we will probably get a Wrestlemania rematch with Flair. 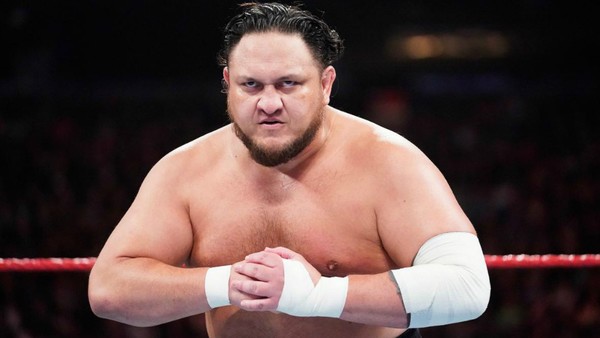 Samoa Joe, Cass, and Daniel Bryan had a pretty slow paced triple threat. Joe had the advantage for most of it after him and Bryan teamed up on Cass to start the match. Bryan takes over for seconds before one of the other men take him out. The match started picking up after Bryan hit Dragon Screws on both men, then hitting dueling Yes Kicks on both.

He Dragon Screws Cass again, but Joe tries to lock in the Coquina Clutch. Bryan fight sit off and gets Joe outside. Cass misses a big boot, and Bryan tries to lock in the Yes lock, but Joe pulls him out. He pays as Bryan hits a flying knee off the apron. Bryan goes to the top rope, and hits Cass with a missile dropkick.

After hitting the Rocket Kick, he goes for the pin, but Joe comes in and snaps on the Coquina Clutch. Bryan ties to fight it off, but passes out. Your winner, Samoa Joe. As Joe leaves, Cass crawls back into the ring. Bryan is slow to get up, but once he does he gets nailed with a big boot. Cass stands over him, arm raised as we go off air.

Well, Joe is the final entrant in the Money in the Bank match. I mean I understand keeping Bryan away from the belt, because whenever he is close again it doesn’t matter who holds it, the crowd will want Bryan. Joe going into the match adds a wildcard that could fight Strowman and stand a chance. Bryan and Cass are gonna have a match on the card too. Just hasn’t been announced yet, but it’s coming.