On a star studded night at the York hall in Bethnal Green, Lawrence Okolie had his chance to fight for the Cruiserweight Commonwealth Title.

Lawrence Okolie is signed by Heavyweight champion of the world Antony Joshua’s promotion label and is also widely know for being his understudy. Joshua made the short walk to the ring with his man and would take a seat at ringside for the fight. 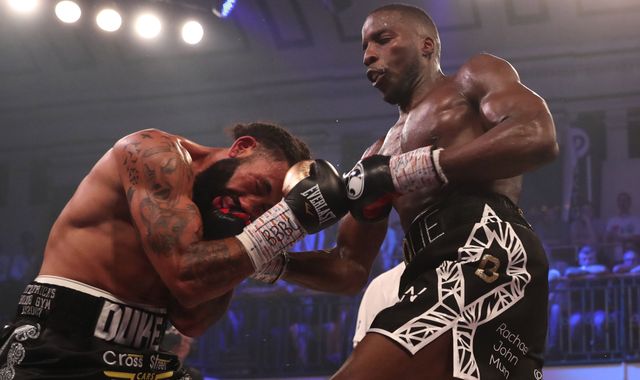 Standing at a massive 6ft 5 Okolie is one of the biggest fighters in the cruiserweight division and on the night this showed. Watkins struggled to get inside or even close enough to land anything considerable.

Okolie was allowed to fight at his own pace and as a result finished the fight on his terms. Watkins has a very modest fight record and has also made one successful defence of his commonwealth title. Lawrence was a step too far.

On a night known as next generation Eddie Hearn put on a great show full of young talent and will power.

Cheeseman stole the show. Clinical from the outset Cheeseman controlled the pace of the fight, he was also the bigger and stronger man.

Upton was put to the canvas on 3 occasions and the referee had seen enough by the fourth round. A comprehensive win for Ted who has put out a warning to his super-welterweight rivals

Reece Bellotti made a title defence against Ryan Doyle.

Bellotti vs Doyle was an action packed fight from the outset and throughout. Both fighters showed metal, passion and sheer determination.

Doyle, fighting out of Manchester, forced a stoppage against the champion Bellotti and the  moment stunned the York Hall crowd.

During the fifth round referee Howard Foster called an end to the fight after Bellotti was badly knocked down.

This was slightly controversial. I had Bellotti up on the scorecards however the ref did not give him a count to continue. Seems harsh to me.

Eddie Hearn can hold his head up high after putting on a great show for the boxing faithful of London.