The San Francisco 49ers have unveiled a new alternate throwback uniform at their State of the Franchise event on Wednesday night.

The confirmation of the new uniforms came from San Francisco 49ers president Al Guido. Guido said on a recent media broadcast the team would be unveiling “a few surprises” at the  ‘state of the franchise’ event and was asked if one of them would be new alternate jerseys.

“We are,” Guido said. “It’s been the rumour, and I can confirm we will be rolling out what I would call a throwback/alternate jersey.”

Before the announcement, Guido wouldn’t elaborate on the details of the uniforms, not wanting to spoil the surprise in store the event itself. He did say the San Francisco 49ers players have already seen them and have reacted positively, and he believes the fans will as well. 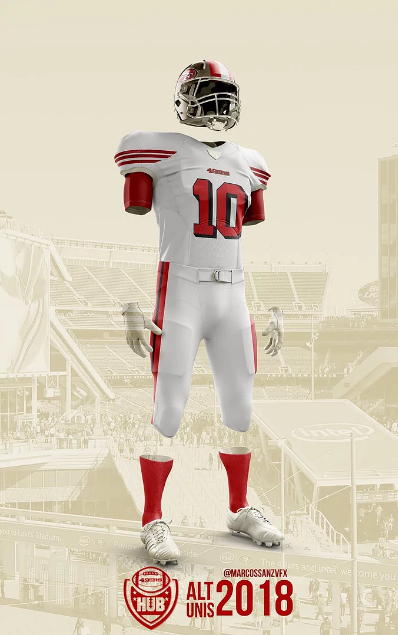 “We rolled them out to the team the other day and the reactions were tremendous from the players… Let’s just say our fans are really going to appreciate the throwback nature of the jersey,” Guido said.

The State of the Franchise event took place on Wednesday night at the California Theatre in San Jose (7 p.m. PT). The event was be hosted by Peter Schrager of the NFL Network and will feature players such as Jimmy Garoppolo, Dante Pettis, Joe Staley, DeForest Buckner, Mike McGlinchey, and Kyle Juszczyk as well as Al Guido, head coach Kyle Shanahan and general manager John Lynch.

the new uniform is the first significant San Francisco 49ers uniform change since the all-black look was unveiled in 2015.

Other notable San Francisco 49ers uniform changes in recent seasons include the look the team wore starting in 1998, which included deeper colours and black shadowing under the jersey numbers, a switch back to a more traditional look in 2009, and a switch from Reebok to Nike uniforms in 2012.

Guido was not asked on the Joe, Lo & Dibs Show if the new alternates would replace the all-black look in the uniform schedule, as has been assumed.