Boxer Eric Molina has been dealt a two year suspension by UK Anti-Doping after testing positive for a banned substance.

The 36 year old heavyweight, tested positive for banned substance Dexamethasone, following his fight with Anthony Joshua in December 2016. Joshua ended the fight in the third round by KO in defence of his IBF title.

Criticised previously in the boxing, UKAD are keen to crack down on an ever more present part of the game. Increasing test frequency and punishment for those guilty made more severe, just some of they ways they are dealing with the issue. Molina’s case is a perfect example of this. 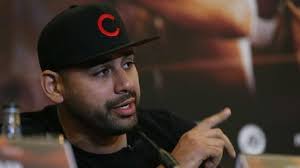 Dexamethasone treats conditions such as asthma. Strictly banned during competition the drug known to give endurance athletes an unfair advantage. A common culprit in the boxing world.

Chief Executive of UKAD Nicole Sapstead said: “All athletes at any level should familiarise themselves with the WADA Prohibited List and ensure they do not put themselves in a position where they may breach anti-doping regulations.”

Molina has accepted this charge and will serve his ban from date of the provisional suspension (28 October 2017) until midnight on 27 October 2019.

UFC: Munhoz vs Edgar not a Robbery

UFC 251: How Masvidal can beat Usman