After a dramatic opening lap that saw three cars retire in a multi-car crash, Lewis Hamilton cruised to victory in Spain. The Circuit de Barcelona-Catalunya in Spain failed to deliver the most dramatic of races, but the Mercedes driver will be happy with the result.

Vettel took second place from Valtteri Bottas on the opening corner and was looking to apply pressure on Hamilton. Whether this would’ve happened is a question that Ferrari will be left to ponder. The events that unfolded behind them on the track on the opening lap meant we will never know for sure.

Everything seemed under control on the opening lap, until Roman Grosjean lost control under braking in turn 3. The Frenchman lost the back end avoiding contact withKevin Magnussen and briefly left the track. He rejoined sideways on in the middle of the pack and kept his foot it leading to a plume of tyre smoke engulfing the track.

With the drivers behind him now completely unsighted it’s a small miracle that only 2 other cars got caught up in the incident. Both Pierre Gasly and Nico Hulkenberg losing wheels as they ploughed into Grosjean’s smoking car. With a huge amount of debris on the track, the ensuing safety car was easy to predict. 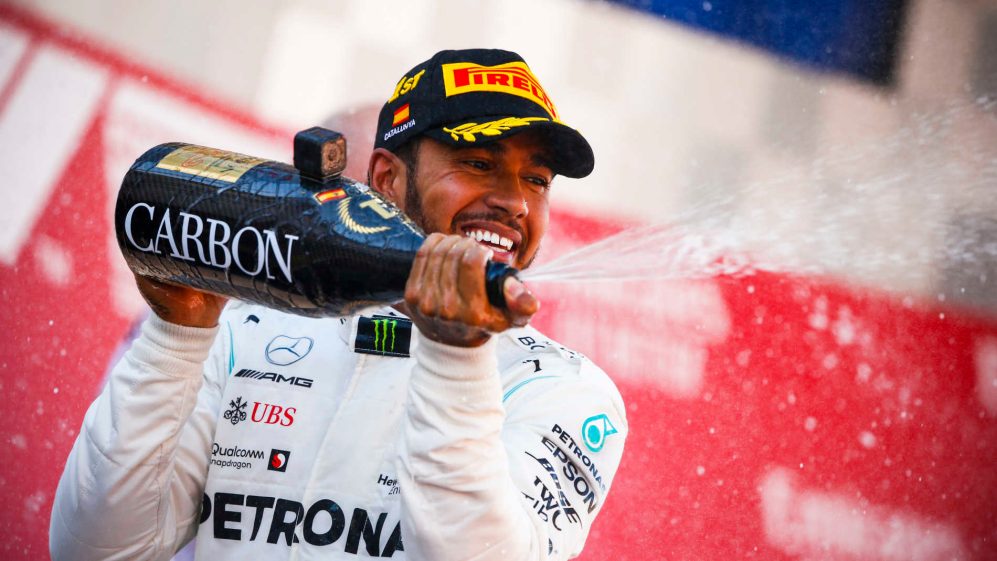 After the safety car period, Lewis Hamilton controlled the restart expertly, as all the cars struggled to get heat back in their tyres. Hamilton quickly extended his lead to 4 seconds and looked comfortable. The Ferrari seemed to lack ultimate race pace and was much harder on its tyres than the Mercedes. Vettel was the first to stop and he dropped behind Bottas. Bottas stopped on the next lap to try and cover off the Ferrari, but Vettel retook second place.

In truth, there was very little action after the opening lap. Hamilton imperiously increased his lead, and barring a virtual safety car later in the race was never stressed. During the virtual safety car, Vettel stopped for a fresh set of medium tyres but was held in the pits as Sergio Perez came in at the same time. The delay pushed Vettel back behind Bottas and Verstappen, costing the German 6 world championship points. The decision was probably the right one however if the Ferrari was as hard on its tyres as it seemed.

By the time the chequered flag game, Lewis Hamilton had a commanding 20 second lead over teammate Bottas. Verstappen was third, Vettel fourth and Ricciardo rounding out the top 5.

The win also extended Hamilton’s lead at the top of the World Championship to 17 points over Sebastien Vettel.

The next race is at Monaco on the 27th May.