Two years on from his first (and until this weekend, only) pole position in Formula 1, Daniel Ricciardo once again found his Red Bull at the very front of the grid ahead of this year’s Monaco Grand Prix. Though unlike in 2016 when a 40 second pit-stop cost him the victory, nothing could stop Daniel Ricciardo from taking the chequered flag and securing his first win in the Principality – though it was by no means easy.

The opening laps of the Formula 1 showpiece

Ricciardo managed to keep his lead into Sainte Devote, as all 20 cars on the grid managed to get through the first corner without incident. Over the next few laps Ricciardo maintained a one second lead to second placed Sebastian Vettel, with a number of drivers up and down the grid complaining about the pace the Australian was setting.

The race remained in this state, with the drivers behind the leading Red Bull all desperate to fully unleash their cars, until lap 12. Lewis Hamilton being the first front runner to pit, coming in swap his old hypersoft tyres for a fresh set of ultrasoft tyres and slotting in behind Esteban Ocon. This in turn forced Ricciardo to pick up his pace at the front of the grid, to find a gap for his own pit stop.

Over the next few laps Ricciardo, Vettel, Kimi Raikkonen and Valterri Bottas all came in to pit for fresh tyres, with Bottas the only driver to put on the red striped supersofts. It seemed like this may have been a smart decision as Bottas began to light up the timesheets coming out of the pit stop phase, however once the other drivers managed to get some warmth into their tyres, this pace quickly faded. 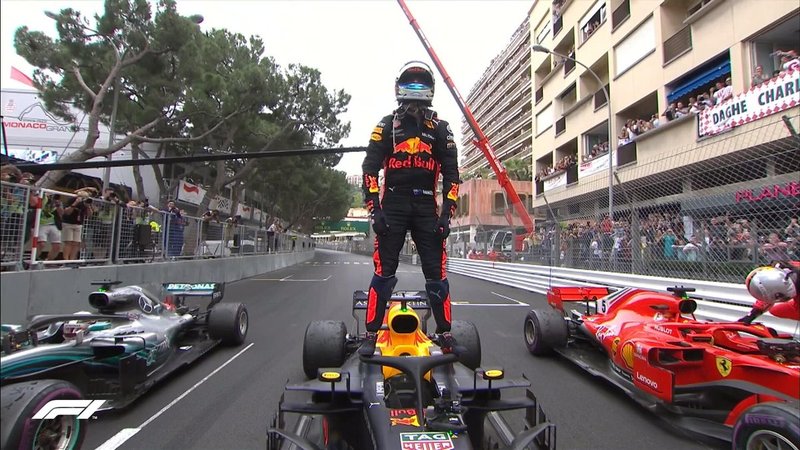 It was on lap 28, with 50 laps to go, that Ricciardo first reported he was down on power. His gap to Vettel was cut to half a second, and the Red Bull was massively compromised in a straight line. On lap 32 Riccardo was informed by his engineer that the problem was not going to get better, and it was something he would have to manage for the remainder of the race. The rest of the chasing pack began to close on the top two drivers, though still no-one could find a way past on the tight streets of Monaco.

Along with his engine issues, Ricciardo also had to contend with two virtual safety cars. The first caused after Fernando Alonso’s McLaren suffered a gearbox failure, the second caused after Charles Leclerc seemed to suffer a brake failure, helpless as his Sauber crashed into the back of Brendon Hartley’s Toro Rosso.

The first VSC did not last long enough for any of leaders to make a cheap pit stop (Hamilton had previously complained about a high level of tyre wear), however the second VSC gave Ricciardo some of the breathing space he needed to nurse his wounded Red Bull to the finish line, telling his engineer on lap 77 “I’ve got it buddy” before taking the chequered flag one lap later.

A frustrated Sebastian Vettel managed to cross the line ahead of Lewis Hamilton, securing some vital championship points over his rival. Meanwhile Max Verstappen put in an outstanding performance managing to thread his way through the grid and get his Red Bull up into the points, with a number of impressive overtakes along the way

The woes of Williams seemed to have been temporarily abated when Sergey Sirotkin managed to drag his car up to 13th on the grid in qualifying. This hard work was all for nothing however, as he was given what seemed an extremely strong 10 second stop-go penalty, as his mechanics were still fitting tyres to his car three minutes before the beginning of the race.

This penalty dropped Sirotkin to the back of the grid, though it wasn’t long before his teammate Lance Stroll joined him after suffering not one, but two punctures throughout the race. The two Williams cars eventually finished at the bottom of the order, something which may become a regular sight this season.