Are Liverpool Fans Being Used?

As the Champions League final looms, Liverpool fans have sought assurances over the due date of their season ticket payments in relation to next year.

“This means more.” Someone gets changed. Jordan Henderson claps his presumably Nivea moisturised hands and Alex Oxlade-Chamberlain looks candidly to his right before the “Make Us Dream” banner is shown being held triumphantly on the Kop. This is the bizarre recurring montage you will be greeted with should you ever venture to the Liverpool Football Club online store. Funnily enough, it actually does mean more. Not to the lad getting changed, not to Jordan Henderson and probably not to Alex Oxlade-Chamberlain.

It means more to the people holding the banner at the end of the clip. The same people who, until only recently had not been granted a delay in finding the cash to pay for their 1819 season ticket in the same week a lot of them have paid for a £2,000 round trip to Kiev. That famous 12th man which is marketed to almost preposterous proportions by that club isn’t getting anything in return and it isn’t right.

Interestingly, the club has actually reacted to strong pressure from the fans and has reconsidered when the season ticket payments are due. Initially, the 23rd of May deadline to pay and avoid any monthly credit plan (resulting in interest) held strong. As potential bad press loomed, the club has sought to appease plans with the typically disingenuous proposal below:

If you have a ticket for the final purchased in your name, pay for your season ticket in 4 interest-free installments. Payment dates are the 23rd of May, June, July, and August.

On the face of it, this actually seems like a fair and well thought out proposal. But why couldn’t the club just have given the fans what they wanted? Most fans were simply asking for an extra 8 days to give them an invaluable payday in a month they were expected to go to Rome and Kiev while renewing their season ticket. The sanction still requires payment before or while most of the impacted individuals are in Kiev.

They will still have to find around a quarter of their overall season ticket cost before they are paid. On top of that, what happens if a miscellaneous processing error takes place within Zebra’s system (the club’s payment plan partners) for people who have newly registered? What if the fan in question is in Kiev when that happens? Will they lose their season ticket? What about the many ticketless fans who will inevitably travel to Kiev and will probably be used in a club endorsed image to market the club? Why can’t they make use of this offer?

It’s just poorly thought out. Why couldn’t the club have taken a leaf out of Roma’s book and subsidised a number of flights with their partners Thomas Cook as a thank you to the group of people who have helped Liverpool reach the final? Instead they cited that an £800 flight to Kiev is an accurate price because that’s how much other travel providers are charging (it’s worth noting flights to Kiev the week after the final are half that price).

The revenues generated by this champions league run will be fairly massive and it would have been nice to see the club engage with the people who have played a huge part in the team getting there. To be honest, an 8-day stay of payment wasn’t really asking much in the first place. 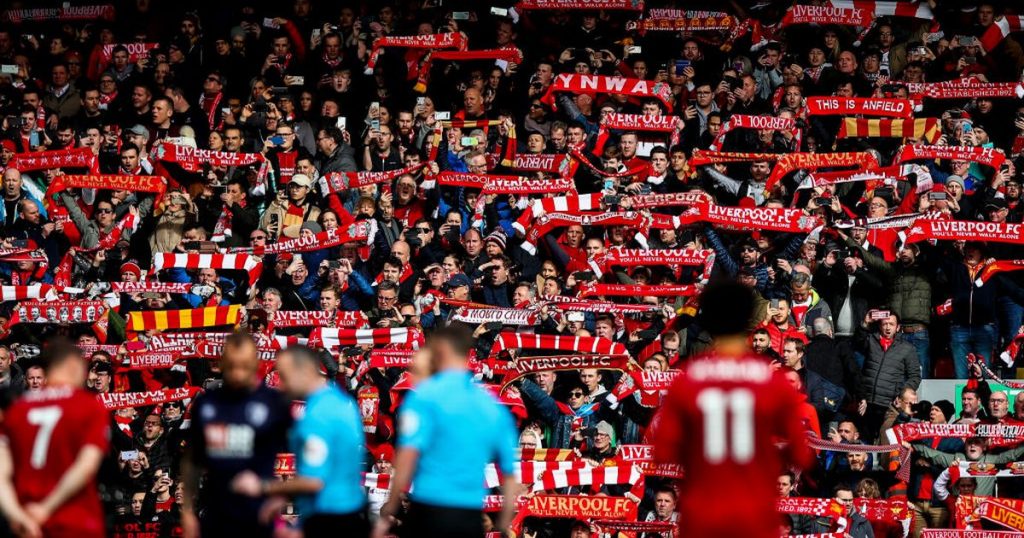 Forgetting what they have

The proposal is expert level PR. The club saves face while still getting season ticket revenue at worst, two games into next season. People who have tickets from other means don’t benefit. People who successfully got a ticket for Kiev but decided not to go because they thought the season ticket monies were due, do not benefit. On a cynical level the proposal is shallow. On a business level, it’s short-sighted.

This desperation for the season ticket revenue upfront forgets the symbiotic relationship that exists when a marketing machine elects to use its customer base within its marketing campaigns. If the club is to continue to use the image of a banner smattered Spion Kop to entice the corporations who fill out the boxes against the likes of Stoke and West Brom, then by logical inference they need to keep that element of the support who provide that (and I hate this phrase) “Anfield experience” happy.

Currently, that is not something they are doing. The club is saying one thing to that core element of the support while doing another and the point can be seen through the club’s marketing strategy. Head to Betvictor, one of the Liverpool’s official partners and see an image of three of the players against a backdrop of the fans with a flare. This in isolation is not a problem but allow me to direct you to an official club notice which says the following:

The use of flares and smoke bombs at any football stadium are a breach of regulations and anyone in possession of these could be subject to a banning order and police action.

If you are going to launch people out of stadiums and ban them from attending future matches for using flares, don’t sell images of people doing just that to your partners. Don’t use images to show the fervent and sometimes partisan nature of the support to generate revenue. I’m not justifying the use of flares (although I personally like them) because they can be dangerous when used unsafely. I’m simply making the point that the club should not be profiting out of the images associated with something that they can later use as an excuse to dilute that element of support which is so key to their PR machine.

Liverpool Football Club is having their cake, eating it but then spitting it out and selling it to somebody else. They run the risk of destroying probably their most useful marketing tool. Upset the regulars and upset the apple cart because once you lose the people who put time and effort into making the atmosphere as marketable as it is (especially in European cup games) then you lose the banners.

You lose that desperate roar that sucked the ball into the back of Petr Cech’s net in 2005. You lose that atmosphere that had Manchester City so rattled after they conceded the first goal in the Quarters.

Most importantly to the club, they risk losing the people who it really does “mean more” to and losing that marketing capability which genuinely does in some cases, make people want to watch Liverpool.