After eight seasons in the top flight, West Brom bid a sad farewell to their Premier League status on Sunday afternoon. Despite a good end of season run led by caretaker manager Darren Moore, West Brom’s demise was all but assured weeks ago.

It all seems somewhat surreal after the start they had to the season. Opening weekend at the Hawthorns saw them win 1-0 against Bournemouth, despite only registering 30% possession. That was followed by another 1-0 win this time at Burnley.

The new influx of players seemed to have them on the right track, even as they were being dominated on the ball. Jay Rodriguez, Gareth Barry and Oliver Burke led the new guard as West Brom looked to kick on from mid-table mediocrity.

Registering just 1 shot on target against Burnley would be a sign of things to come, as they would only register more than 5 shots on target 4 more times all season. They wouldn’t notch another win until January 13th.

Off With His Head 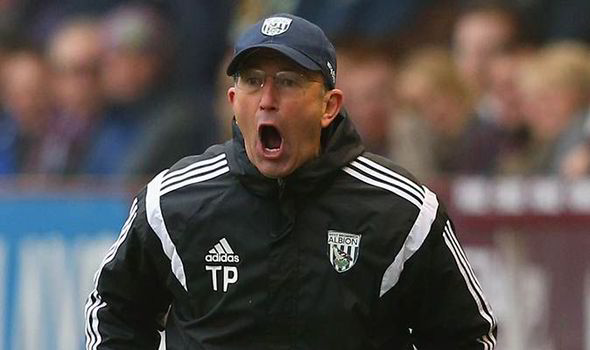 In the midst of this horrendous run, West Brom sacked long-standing manager Tony Pulis on the 20th November. Whether Pulis would’ve been able to right the ship will never be known. What is certain is that Alan Pardew was a horrendous mistake. Picking up just 14 points in 21 games Pardew sank the club deeper and deeper into trouble.

The mistake of hiring Pardew was compounded by the board failing to recognise that he wasn’t the right man. With no bounce in performance on his appointment, warning bells should’ve been ringing. But the decision to sack Pardew wasn’t made until too late. By the end of his tenure, Pardew had the second lowest win rate of any West Brom manager ever.

Just 6 games remained when Darren Moore was appointed the caretaker manager on the 2nd April. Performances immediately improved as Moore inspired the players and reverted more to the tactics of Tony Pulis. It may not be pretty, but it is certainly effective. Winning 3 games and drawing 2 of his 6 games, Moore deserves a shot at the job full-time as West Brom look to bounce back. Moore’s only defeat coming on the last day of the season at Crystal Palace after their fate was secured.

There are no guarantees in the Championship, and West Brom has a hard fight to return to the top-flight. A number of the squad will surely leave, either because of age or wanting to remain at the top level. However, the underperformance of those players may also mean their chances are limited.

Ben Foster will surely leave, as will Jay Rodriguez, Solomon Rondon, and Johnny Evans. The turnover of players is inevitable under the circumstances. How they replace, and who the manager is will help determine whether they bounce straight back or enter years of Championship toil.