Let’s flashback to April 2018 for a minute. After a 2-1 defeat to Burton Albion, Sunderland AFC were finally relegated to League One after a horrendous Championship campaign. The club appeared to be in free-fall, still trapped in the clutches of an absent, careless owner. The players were lining up at the exit in their masses as the prospect of third-tier football loomed. Pink seats were seen throughout a half-filled Stadium of Light filled with disheartened fans. The future was looking wholeheartedly bleak.

Now, let’s look at the state of affairs as the first game of the season approaches. Sunderland are under the current control of businessmen Stewart Donald and Charlie Methven. Argentine mogul Juan Sartori is to be a confirmed director within a week, providing a vast financial benefit. Ten summer signings have been made, along with the timely departures of many unhappy players. We have a young, promising coach to bring the club back to their glory days. And to top it all off, those horrific pink seats are finally gone forever.

With this said, the upcoming League One season has all the makings of a resurgence for the Black Cats. With such a feeling of euphoria surrounding the club and its fanbase recently, what better time is there to make some predictions? 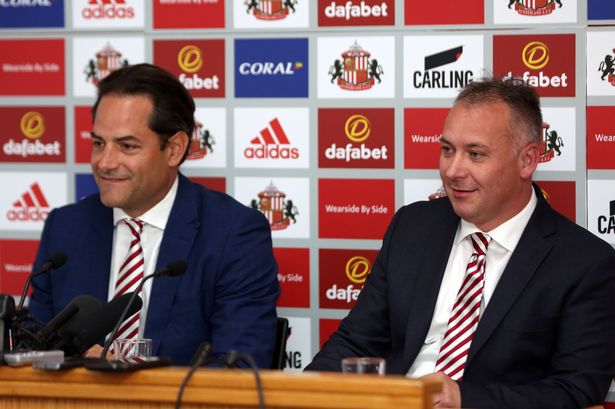 It might finally be time to get on the Sunderland hype train for this League One season. The many summer signings combined with Sunderland regulars and youth players make a very talented squad going into the new season. In particular, the signings of Jack Baldwin in defense and Charlie Wyke up front excite me. The vast majority of signed players are proven at this level, and should lead the charge for a promotion season this year. Do I dare predict a first-place finish? Yes, I think I will.

Stewart Donald and Charlie Methven arguably became the most popular people on Wearside after their much anticipated takeover of the club earlier this year. Few other owners would have sat with the team of a fan magazine and enjoyed takeaway pizza and beer, I’m sure. I expect this positive relationship to not only continue, but improve further. The main grievance of many fans in regards to previous owner Ellis Short was his constant absence and unwillingness to speak to the press. In this new era of ownership, it seems as though this will not be a problem for the future.

In their Championship campaign, the floundering Sunderland side lacked a true goalscorer to spearhead their attacking corps. The signing of James Vaughan left much to be desired on the goal-scoring front, whilst loanee Ashley Fletcher consistently failed to find the back of the net. However, going into this new season, a rejuvenated strike-force may spell the end of these woes for Sunderland.

Recent signing Charlie Wyke is a proven threat in both creation and finishing, with young starlet Jerome Sinclair joining the club on loan. Furthermore, young star Josh Maja has shown sparks of brilliance lately, and will also be a very beneficial addition to the first team. With this said, I expect a severe increase in goals this season for this side.

Sunderland open their League One campaign against Charlton at a Stadium of Light filled with over 25,000 hopeful and dedicated fans. With all these recent changes, a roller coaster season is surely on the cards here.