Colombia did what they needed to do and won against Senegal in order to see them through Group H and into the last 16. Despite Senegal being in charge for most of the match, a lapse in concentration sent them out of the tournament. So much was equal between Senegal and Japan that the amount of yellow cards decided second place in Group H.

Senegal started the more positive of the two sides, seemingly determined to get the point which would have seen them through. They created many chances before being awarded a penalty in the 16th minute. VAR was consulted for the penalty and the decision was overturned. In video replays it was made clear that Davinson Sánchez got a touch on the ball before bringing down Sadio Mané in the box.

It was described by some as the best tackle of the tournament. James Rodriguez suffered an injury and was forced off in the first half. Senegal looked the better side going into the half but failed to make their dominance count. The teams went in to the half 0-0. 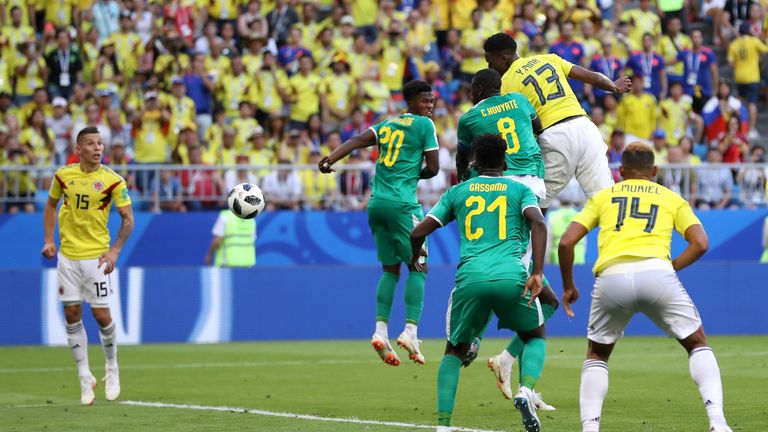 Senegal started the second half much as they played the first half. Although the team was the more positive team, they faded as the half went on. Their World Cup dream was finally ended in the 74th minute when Colombia defender Yerry Mina scored his second goal of the tournament. Senegal were lining up to defend a corner when they brought on a substitute.

Substitute Moussa Wagué sprinted on from the sideline to help his country defend the corner. He did not have time to get settled and Yerry Mina found space in the box to head his side into the lead. Colombia managed to see out their win to send them through as victors of Group H. Senegal finished level on points with Japan but went out on the fair play tiebreaker as they finished with more yellow cards than Japan.

Yerry Mina proved to once again be a vital player for Colombia. As well as scoring the only goal in the game, he also put in a spirited defensive performance. His second goal of the tournament saw Colombia claim top spot in the group and saw them set up a last 16 tie against England. This is as England finished second in Group G.