This edition of the MLB weekly wrap around we will focus on who’s hot and who’s not. From the surging Braves to the falling Dodgers, we will take a look at the weeks biggest storylines.

Nick Markakis and the Atlanta Braves

You wanna know who has the best record in the National League? The Atlanta Braves. Led by a young core of Freddie Freeman, Ozzie Albies, and Ronald Acuna Jr. But there is one person who is a surprise for  the young team, Nick Markakis.

Yeah, that Nick Markakis. The 34 year old Right Fielder has been on a tear to open the season. Racking up a batting average of .346 (2nd in the NL) with 7 HR’s and 30 RBI’s in the first two months of the season, Markakis is a big reason why the Braves are surging. He leads the NL in Wins Above Replacement (WAR) with 2.2. All of these numbers are projected to be career highs for him. While he is hot now, at some point he will come back down to his career .289 average. Even if he does, his bat in the lineup should help the younger players as the season drags on. 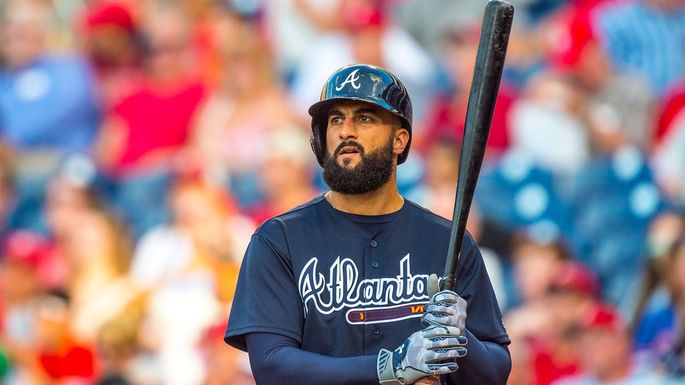 Another young team at the top of the NL East, the Phillies are one of the surprise teams in the league.

Coming from last to contending for the division, the Phillies are way above schedule on their rebuild. Being led by youngsters Odubel Herrea, and Maikel Franco, they are second in the division at only 1.5 games back. But the biggest concern comes at the back end of the rotation. Closer Hector Neris has 5 losses with 3 blown saves. His ERA isn’t helping as it sits at 5.17. If the Phillies want to contend this year, they will have to make a deal.

The NL Central….even the Reds

Looking at what is arguably the toughest division in baseball. 4 out of the 5 teams are 4 games above .500 or higher and all within 2 games of each other. I know it is early, but each of these teams have made the playoffs in the last couple years, so we know the talent is there. The Cubs are the worst team outta the bunch at 21-17. And they won a World Series with their core group. Hell, even the Reds just swept the Dodgers. Watch out for this race toward the end, just not the Reds.

What difference a couple months make. From being in the World Series to the worst 40 game start since 1958. The injuries can be part of the blame, but the bullpen is where it really falls apart. Tied with the Twins for the most HR’s given up, it’s not just a band aid fix. Getting Turner and Forsythe back will help the offense, but it’s gonna take a major move to fix the bullpen.

Aside from Manny Machado, the team is fallen apart. Going 13-28 to start the season, it doesn’t look like it’s gonna change anytime soon. At least they should get a big haul of players when they do decide to trade Machado. It’s about time to start the rebuild process.

The White Sox rebuilding has stalled

Well we all knew a rebuild was happening, but it looks like it’s going to be longer than most. Starting the year with the worst start in franchise history. Going only 3-15 at home, where every other team has won at least twice as many home games. It’s not looking pretty in the south side, maybe the Cubs could use some more fans. If not, kick up your feet and wait for the Bears and football season.