In the opening game of Group D, Euro 2016 fan-favourite underdog Iceland pulled off yet another shocking upset against the giants of Argentina. The Scandinavians showed commendable defensive discipline whilst often looking dangerous on the counter attack. Argentina, despite their abundance of attacking quality, could not break this back-line. The game ultimately resulted in a 1-1 draw.

In a match-up which many fans and pundits alike predicted to be a one-sided show, the opening minutes of this game, surprisingly, showed a sense of balance. Whereas Argentina obviously boasted an abundance of talent, the tough pressing tactics of Iceland worked to limit their running space. The likes of Messi and Di Maria were kept quiet, with Iceland shirts seemingly all over the pitch. The deadlock was broken, however, after a haywire Marcos Rojo shot fell to clinical striker Sergio Aguero. In impressive style, Aguero, despite being mobbed by many Iceland defenders, performed a skillful turn in the box before powering the ball past Halldorsson. This was Aguero’s first World Cup goal, which surely opened the gates for the Argentine domination we all expected.

However, in typical Iceland fashion, they quickly enjoyed a spell of possession around the Argentine box after the restart. This ultimately resulted in a Caballero save finding its way straight to Finbogasson, who calmly slotted the ball into the centre of the goal. Game on.

After this goal, however, Iceland seemed to be content to allow Argentina to dominate possession. By the end of the half, Argentina would hold the ball for 80% of the time, completing over 300 passes. Despite this, and the fact that Argentina boast one of the best group of attackers in the competition, Argentina struggled to break the Iceland back line. Before this game began, any Iceland fan would have taken a draw. The players seem to feel the same way.

Despite the quality of their attacking options, the questions raised about Argentine keeper Willy Caballero saw confirmation in this first half. On several occasions, the Chelsea back-up keeper made some hair-raising decisions. These include a collision with an Iceland player which may well have resulted in a penalty, and many examples of bad ball-handling skills. With this in mind, would the Scandinavians be able to shock the world in the second half? 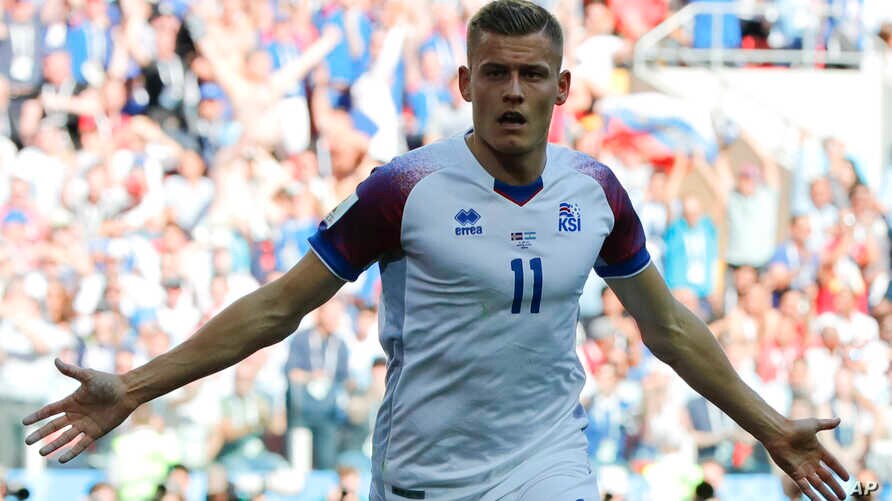 The second half of this game initially began with a similar balance as seen in the opening moments of the first half. Both sides enjoyed spells of possession, with some half-chances occurring at both ends.

The second half remained uneventful until the 63rd minute, when Lionel Messi won a penalty for the Argentines. With this shot, Messi could re-affirm his status as the greatest player in the world after Cristiano Ronaldo’s hat-trick the night before. However, his penalty kick was brilliantly saved by Halldorsson, who correctly judged the trajectory of Messi’s somewhat weak penalty. I doubt he will ever be buying his own drinks in an Icelandic pub ever again.

As the second half progressed, Argentina continued to attack, yet the Iceland back-line remained solid as ever. With the final ten minutes of the half approaching it seemed more and more likely that Iceland would hold on to their point.

Lionel Messi’s disappointing showing is encapsulated in his 95th minute free kick, which he sends straight into the wall. This turns out to be the last kick of the game. Iceland have done it once again. Final score: Argentina 1-1 Iceland.

The narrative throughout this game revolved around the Icelandic defense- in particular, goalkeeper Hannes Halldorsson, who was equal to everything Argentina threw at him. Argentina just couldn’t seem to break through this back-line. Their discipline and composure throughout this game despite the dangerous Argentine attack has to get a mention here. My personal man of the match goes to Halldorsson for this strong showing.

I have no idea what to make of this Argentina showing. They showed obvious skill in their retention of possession. By the end of the game, the team had completed over five-hundred passes. On paper, Argentina certainly dominated this game. To me, it is a mystery why the team doesn’t seem to function as a unit. Lionel Messi was invisible for most of the game. His only key contribution to the team were a missed penalty. With this point, gaining wins in their remaining two group games just became increasingly important.