England took a big step in the World Cup, winning their Last 16 fixture against Colombia on penalties. Tottenham midfielder Eric Dier scored the decisive penalty to send England to their first World Cup Quarter Final since 2006. England will now face Sweden in the Quarter Finals on Saturday 7th July.

The game started with both teams matching each other and pushing the other. Throughout the first half, the game looked tight where either team could win if they produced a moment of brilliance. As the half went on, England looked more like the dominant side and passed the ball around well. However, England failed to make that control count and went in to the half level with Colombia.

The second half started very much the same. Unless England had a defensive lapse, they looked the more likely team to score. The team won a penalty when Colombian midfielder Carlos Sánchez brought down Harry Kane in the box. England had to wait a long time to take the penalty as Colombian players surrounded the referee in protest. When Kane was finally allowed to take it, the Spurs striker struck the ball with power straight down the middle of the goal. 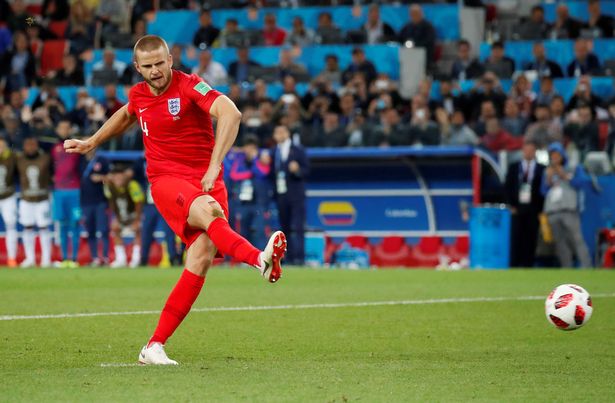 England led going into the final few minutes and the feeling was that England had done enough to see them through to the next round. However, a 93rd minute corner for Colombia brought the score level in fantastic fashion. Colombia defender Yerry Mina scored a powerful header from the resulting corner. The ball bounced over the head of Kieran Trippier and past Jordan Pickford. This incredible last minute goal sent the match to extra time.

Colombia looked to be the better side during the extra time periods. England did not look like the team that they were in normal time. The last minute goal took a lot out of them and England failed to get going in the extra time period. The match was level after both periods concluded and the match went to the dreaded penalty shootout. The shootout stood at 3-3 when Carlos Bacca stepped up and had his penalty saved by Pickford. All Eric Dier had to do at that point was score to win the game for England. Dier stepped up and slotted it to the left past David Ospina to send England through to the Quarter Finals in dramatic fashion.

Harry Kane lead by example again as he put in an amazing effort against Colombia. The England captain stepped in to the role and put the team into the Quarter Finals for the first time since 2006. The team is likely to head into the Sweden game as favourites and will have to rely on Kane again to get the team through to the Semi Finals.