The Winnipeg Jets laid down a marker with 3 goals in the opening 7:35 of the NHL Western Conference Finals on their way to a 4-2 win. The Golden Knights aren’t a team built to come from behind, and this early statement from the Jets shows how they intend to handle this series.

Byfuglien And Scheifele Led The Charge

Dustin Byfuglien and Mark Scheifele opened the NHL Western Conference Finals in style, both registering a goal and an assist as they put Vegas to the sword. Very quick out of the gates, the Jets didn’t give the Knights any chance to settle and were out of sight before the first period was over. Blake Wheeler added 3 assists.

“We didn’t have much of a rest, we’re still in game mode. It was just a matter of coming out, playing our game, keeping it simple. We got in moving our feet right away, ice opened up, so we got to move the puck easily, just do simple things.” 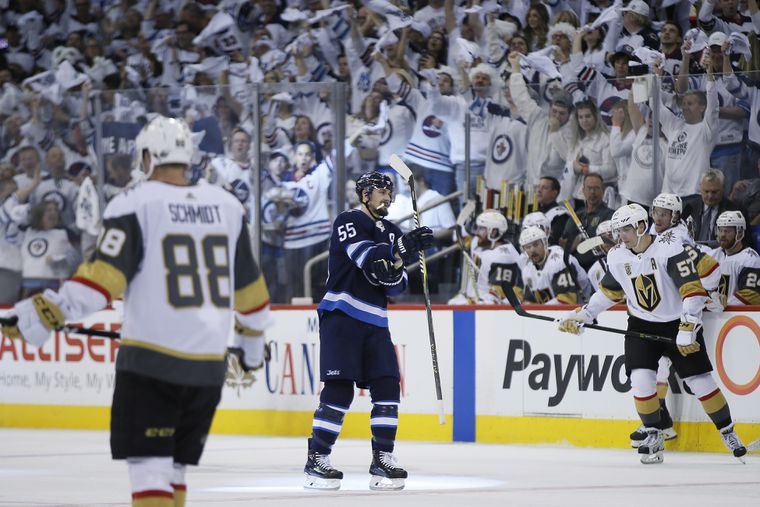 The Vegas Knights have proved everyone wrong to make it this far. But so have the Jets and Vegas will need to pick up their game if they’re going to get back into this series. Always able to fight back and grind themselves into wins, the Knights have their backs against the boards already.

Vegas Needs To Change The Narrative

If the Winnipeg Jets can keep up this momentum, and this pace, it will be tough for Vegas who managed just 21 shots in the game. Marc-Andre Fleury allowed 4 goals on 23 shots, way below his usual standards. Although he didn’t play a bad game, the Jets played the situations much better than the Golden Knights did. Vegas needs to slow the game down and make Winnipeg work much harder for its chances. Grind it out hockey needs to return and fast.

Game 2 of the NHL Western Conference Finals is on Monday.