In the 2018 star-studded SEC track championships, there was a minute of stand out incredible performance from Kentucky Freshman Sydney McLaughlin. – In fact, it wasn’t even a minute as Kentucky fresher won the 400-meter hurdles in a record-shattering 52.75 seconds.

How this wasn’t called by anybody in the media this year is quite surprising. She’s been breaking records at a record pace all year in the collegiate season. So, when she stepped to the starting line Sunday, any and all 400 hurdles records were most definitely in danger.

McLaughlin duly delivered and her winning time of 52.75 swept away previous victories which include:

Sydney McLaughlin, still only 18 years old said after the event that “52 something” was the goal but she believes she could go even faster. Currently, she’s only .41 seconds behind the world record (52.34) set in Russia 15 years ago by Yuliya Pechonkina
I’m sure Sydney will have the Russian world record in her sights and it may come a lot sooner than we all think. Especially considering the fact she’s managed to shave .85 off her own personal best record in the past 3 weeks.
McLaughlin, who unsurprisingly also owns the 2nd highest ranked time in the world in the flat 400 meters, came out in the 3rd leg of the 4×400 relay at the SEC track championships 2018 to close out the event.

Coming up for McLaughlin in the near future are the East Preliminaries in Tampa (May 24-26) followed by the NCAA Championships (June 6-9) in Oregon.

I expect the hype will continue to build surrounding Sydney as she movies into Professional status, where she will inevitably make her mark on the world stage.

Wildcats coach Edrick Floreal has attempted to play the 18-year olds stardom down in recent months claiming that she can still develop her game from an all-around perspective. Although Floreal is quick to acknowledge how special the young freshman is.

Have we just witnessed the birth of a star the SEC track Championships?

HIGHLIGHTS FROM THE SEC TRACK CHAMPIONSHIP 2018

Grant Holloway, Florida: The future of men’s hurdling in the professional game continued his impressive race towards stardom. The reigning NCAA champion in both the 110 and 60 hurdles crushed the event this year with a 13.15. In the process crushing the SEC Meet and Track record and the falling just short of an all-time record (finishing second overall in all time). 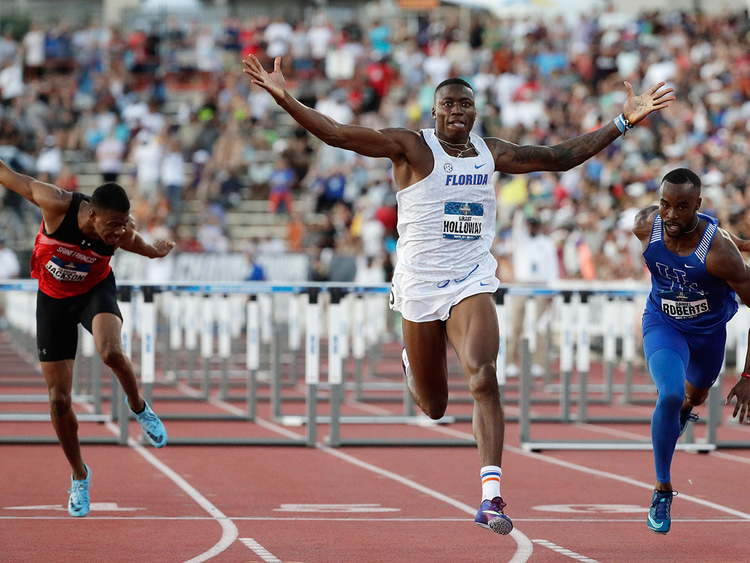 Jasmine Camacho-Quinn, Kentucky: Jasmine was an easy winner in the women’s 100 hurdles. The junior student finished with a time of 12.40 setting a new meet and track record in the process whilst being only .01 off of the all-time collegiate record.

Other Stand Out Stars

Karissa Schweizer, Missouri: Unfortunately, the Missouri senior athlete came up just short of her initial expectations. Karissa held her own until the final stretch where she was outshone by Rhianwedd Price-Weimer of Mississippi state.

Schweizer thankfully improved when the 5,000 came around a couple of hours later where lapped almost half of her opponents. In the end, taking home 1st place by 17 seconds. She has now won 8 SEC track championships and will be going to her 6th NCAA meet next month.

Keturah Orji, Georgia: Without a shadow of a doubt the greatest triple jumper in NCAA history put an end to her SEC career on Sunday by dominating her signature event for an unprecedented 8th time. Orji is a 6-time NCAA champion and she will be competing in her 4th straight NCAA outdoor championships next month.

Nathan Strother, Tennessee: Strother Turned on the entertainment in front of his home crowd finishing second in the 400 with a 44.34 (a personal best). Nathan now leads the list of American-born athletes in the 400 for 2018.

Aleia Hobbs, LSU: Aleia won the women’s 100 and in the process set an SEC track championships record time of 10.93 (tying her for the No. 3 time in the world this year).

Florida Gators: In what was an impressive day for the Gators all-around. Florida won both the men’s and women’s team titles for the first time in the school’s history.