Current holders Lyon have won a record 5th Champions League title after coming back to beat Wolfsburg in extra time.

The sending off proved pivotal as the French outfit took full advantage of their extra man with 3 goals in quick succession.

Ada Hegerberg enjoyed an individually successful record-setting night as she became the first player to score 15 goals in a single Champions League campaign.

Lyon Feminin, who incidentally carried on their unbeaten streak to 41 games and much like Real Madrid could do in the men’s final, Lyon became the first women’s side to win 3 consecutive European titles.

In regulation time it was relatively even although Lyon had the better of the opportunities. Dutch winger Van De Sanden, bought some much-needed excitement and pace after coming on extra time.

Although Van De Sanden won’t get the credit, she deservedly turned this game around for the Ligue 1 champions. 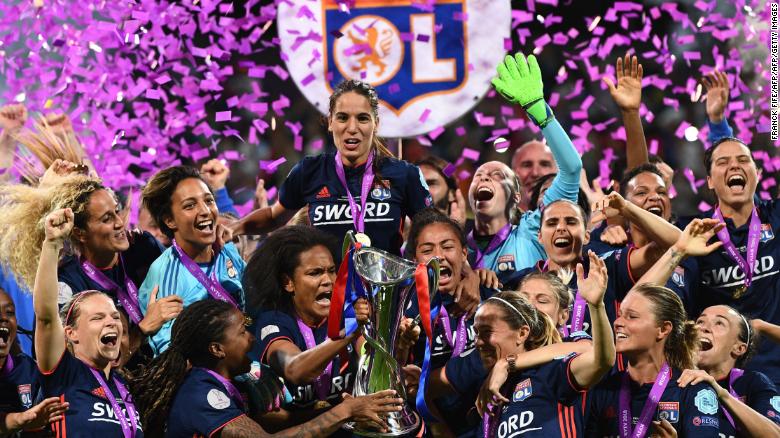 Lyon’s Domination has Been Incredible

In a repeat of both the 2016 and 2013 Champions League Finals. Wolfsburg was playing in their 4th final since 2013 whilst 3-time champions Lyon were appearing in an astonishing 7th final in 9 years.

It would be fair to say that both Wolfsburg and Lyon have been the only real contenders in the Champions League for the past several years. Lyon has proved to be particularly skilled at penalty shootouts. Having won their previous two tournaments under such fashion in 2016 and 2017.

Both the German and French giants have already tied up their domestic leagues back home with Lyon failing to post an ‘L’ since a 1-0 loss in April 2017.

Wolfsburg path to the final included knocking out English champions and double winners Chelsea in the semi-finals.

The French side’s eventually comfortable victory distracted focus away from a potentially controversial moment, after they thought they had scored in normal time through Henry.

Henry played a beautifully flicked header which was cleared by Wolfsburg’s Noelle Maritz from inside the box, with replays appearing to suggest the ball had in fact crossed the goal line. Thankfully it didn’t alter the result whatsoever.

What a fantastic game of football to display the true talents of the Women’s European game.