After a season of discontent, Isco has decided his future remains at Real Madrid, with the departure of manager Zinedine Zidane being key to his decision. After a highly public spat with former manager Zidane, Isco had been heavily linked with Manchester United, and others, this summer.

A lack of starts and a significant reduction in playing time in the 2017/18 season had weighed heavily on him. While his appearances became more frequent towards the end of the season, Isco was unhappy with his lack of minutes in the main part of the season as Zidane often preferred Bale.

What Happened At Madrid Last Season

25-year-old Isco has been touted as one of the best midfielders in the world, but last season at Madrid wasn’t his finest. With his playing time reduced, and starts rarer than usual, he took his frustration public after he scored a hat-trick for Spain in March. 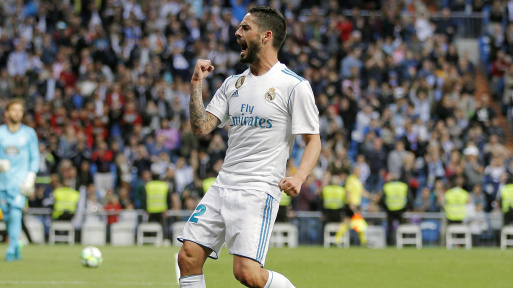 “He shows his confidence in me with the number of minutes and games he gives me,” Isco said of Zidane. “At Real Madrid, I don’t have the kind of confidence that a footballer needs; maybe the problem is me and it’s just the way it is with the number of good footballers there are there. Of course, I want to show Zidane I can be counted on.”

The star-studded line-up of la galácticos had seen him drop down the pecking order, as Bale returned from injury and Ronaldo was always going to play. His form also waned as his minutes were curtailed.

The Future Looks Rosy for Isco

With the key departures of Zidane and talisman Ronaldo it would appear that Isco’s minutes should increase dramtically. He reported back after the world cup early from his holiday and is training hard with new manager, and ex-Spain manager, Julen Lopetegui.

While Manchester United were thought to be quite keen, it became clear early in the discussions that the departure of Zidane had settled the issues.  Stories that he did not want to play for United Manager José Mourinho were completely unfounded.

Lopetegui has long been a supporter of Isco, and his appointment seems to have helped resolve the near-future of one of their brightest attacking stars.

Facebook
Twitter
Pinterest
WhatsApp
Previous articleA Day Of What Could Have Been For England In Birmingham | Day 2 Review
Next articleLAZY FAN EXCLUSIVE: Markovic Headed For Anfield Exit
- Advertisement -