England cruised to a comfortable three wicket win in the opening One Day International of the five match series against Australia at the Oval.

The home side opted for an unchanged bowling attack despite the thrashing they were given by Scotland in the embarrassing six run loss that England suffered on Sunday. Thankfully for England, they bounced back from that disappointment and were much improved against a new-look Australian side which had made six changes from the last ODI they played.

David Willey got England off to a perfect start after Australia won the toss and chose to bat first, getting Travis Head caught in the slips by Jonny Bairstow for 5. Head’s dismissal came in the second over and England took regular wickets up until the 20th over with Aaron Finch (19), Shaun Marsh (24), Marcus Stoinis (22) and Tim Paine (12) all getting starts but failing to get a meaningful score.

With the score at 90-5, Glenn Maxwell and Ashton Agar shared an 84-run partnership which was by far their most meaningful partnership of the innings. However, it simply did not last long enough with Maxwell departing for 62, caught in the deep by Bairstow off Liam Plunkett.

Agar departed less than five overs later, LBW to Adil Rashid for 40 and the England bowling attack proceeded to run through the Australian tail in just 35 balls, bowling them out for 214 off just 47 overs.

All the England bowlers contributed to an excellent performance but the two spinners Rashid and Moeen Ali were particularly impressive, taking five wickets between them and going at just 3.60 and 4.30 an over respectively. Liam Plunkett also picked up 3-42 from his eight overs, adding two lower-order scalps to his prized Maxwell wicket.

Australia will be incredibly disappointed with their batting performance and, although Agar was their second highest scorer batting at seven, they may well choose to bring in an extra batsman for the second ODI and push Agar down the order to eight to strengthen their top order.

Their bowling attack on the other hand was far more impressive as they did their best to run England close and protect a massively under-par score. Billy Stanlake was quick and hit his line and lengths perfectly as the strike bowler in what was only his fourth ODI and the 23-year-old seamer struck with just the second ball of the England innings, bowling Jason Roy for 0. 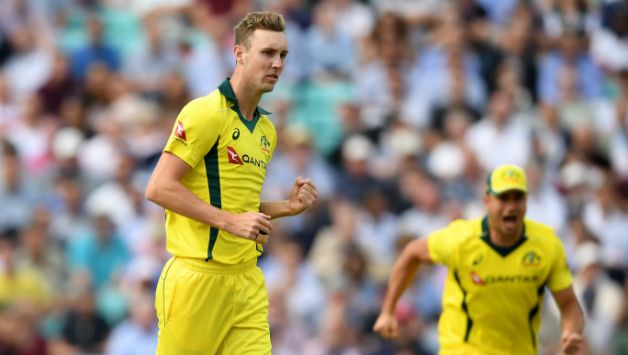 Alex Hales departed in the fourth over for 5, LBW to the debutant Michael Neser to give Australia a slight sniff of an opportunity. Unfortunately for the tourists, Bairstow was looking in fine form as he looked to equalise Kumar Sangakarra’s record of four consecutive ODI hundreds, smashing six fours.

However, he too departed quickly for just 28 after picking out Head perfectly on the boundary rope who was not about to miss out on a golden opportunity to dismiss England’s in-form batsman and it looked as though they were having a minor wobble at 38-3.

Then, captain Eoin Morgan joined Test captain Joe Root at the crease and the two set about quickly putting any England worries to rest, sharing a 115-run partnership as they both made half-centuries.

With England looking like they were cruising to an easy victory, Andrew Tye removed Morgan for 69 with the score at 153-4 and both Jos Buttler and Root followed just 10 runs later to leave England needing 47 with just four wickets remaining.

After seeing their tail fail to get them over the line against Scotland, England would have been worried about getting bowled out once again but only Moeen Ali fell as Willey took control to guide England home alongside his Yorkshire colleague Plunkett, hitting a match-winning six off the last ball as part of his 35 not out.

Despite having a little wobble as they completed their win, England can be pleased with their performance in this first ODI as they comprehensively bounced back from the disappointment of Scotland and will be looking forward to the second ODI on Saturday at Cardiff.