Well, college football came back with a bang.  And it was glorious.  There were some good games in week 1, most of which lived up to the hype (most notably Notre Dame/Michigan and Washington/Auburn).  In previous years, week 2 has been kind of a letdown following the slate of big games in week 1.

However, that does not really seem to be the case this year as there are more than enough solid matchups to go around.  All games are listed in chronological order and all times listed are Central Time.  All rankings reflect the most recent AP Poll.  And remember, if your team doesn’t make this list, it’s only because I hate them.  Here are the college football games to watch in week 2. 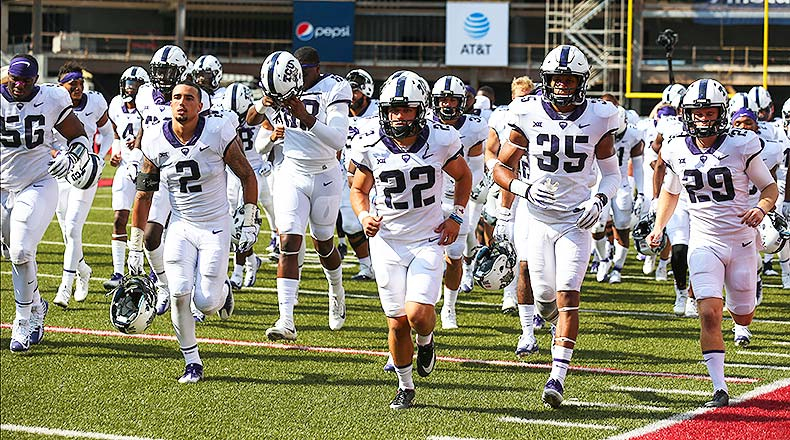 Why you should watch: It’s the only game of the night and it’s a rivalry game.  This is the 90th edition of the Battle for the Iron Skillet.  TCU blew past an FCS team in week one while SMU dropped their opener to another in-state school (North Texas).  Expect a lot of points to be scored in this one.

Why you should watch: A big non-conference game between a consistent and fundamentally sound Kansas State team and a Mississippi State team with high expectations.  Kansas State has been making more forays into non-conference matchups against SEC teams of late (regular season games against Auburn in 2014 and Vanderbilt in 2017 plus bowls against Texas A&M and Arkansas in recent years).  This should also be the first look of the season at Bulldogs QB Nick Fitzgerald.

Why you should watch: The post-Baker Mayfield era got off to a flying start for the Sooners as they massacred a very good FAU team.  They were so dominant that they pulled their starters in the second quarter.  Meanwhile, Chip Kelly’s return to college football got off to an inauspicious start as the Bruins dropped their season opener to Cincinnati in front of a half full Rose Bowl.

TV: CBS
Why you should watch: This game could pretty much see the SEC East wrapped up early.  South Carolina is a trendy upset pick here but Georgia is ridiculously talented on both sides of the football.  It’s worth nothing that Will Muschamp is just 25-23 against the rest of the SEC while Kirby Smart is 12-6 against other SEC teams. College football wouldn’t be college football without Georgia.

Why you should watch: It’s a rivalry game that doesn’t get nearly the hype that it deserves.  It’s been back and forth between these two of the last seven years with Iowa winning four and Iowa State winning three.  Most of the games have been close too (including a pair of OT games).

Why you should watch: The biggest game of the week.  And another edition of Jimbo vs. Dabo.  Jimbo Fisher of course used to be the coach at Florida State in the ACC where Dabo Swinney and Clemson quickly morphed into fierce rivals.  These are two of the four active head coaches with national titles on their resumes (the other two being Nick Saban and Urban Meyer).  Clemson has an elite defensive line while A&M is paying Jimbo $75 million to win games like this (that his predecessor, Kevin Sumlin, could not).

Why you should watch: Another rivalry game.  This is the fourth straight year these two teams have played and right now Penn State has the upper hand, winning both meetings in Happy Valley.  However, the Nittany Lions were pushed to the brink by Appalachian State last week and Pitt won the last meeting in Pittsburgh so anything can happen.  It’s also been quite some time since the Panthers hosted a big night game (think Notre Dame 2013) so the place should be jacked.

Why you should watch: There are major Pac-12 title (and possibly College Football Playoff) implications when these two teams meet.  USC has won four of the last seven meetings between the two (including the 2017 Pac-12 Championship game).  Both teams faced stiffer than expected competition in their week 1 games (USC trailed UNLV early on while Stanford went toe to toe with San Diego State).

Why you should watch: It’s #Pac12AfterDark.  Michigan State was quite underwhelming in their season opener against Utah State, needing a last minute TD and then an interception to seal the deal.  They still have one of the best QBs in the B1G with Brian Lewerke and one of the best coaches in Mark Dantonio.  On the other side, Arizona State was initially a laughingstock for hiring Herm Edwards to be their new coach, but he had the Sun Devils ready to go in their season opener as they smoked UTSA 49-7.