Bama vs UCF. Both fan bases have been clamoring for it and rightly so. Alabama has the pedigree to say they can beat anyone anywhere. UCF is back to the top after having a dismal winless season only two years ago. Both teams claim a national championship, but only Alabama will be recognized nationally. Shouldn’t the underdogs get more respect?

Yes, the polls left them out of the race and the College Football Playoff all but wrote them off. But what’s the difference between national champions and the only undefeated team in the country? What if they beat the team that defeated the eventually national champion?

What would you do if put in their shoes? Would you quietly take your Peach Bowl trophy and win over Auburn and go into the offseason, or would you do what the Knights did and campaign for a national championship, or at least a spot in the playoffs? The Knights claim for a national championship truly begins the conversation about expanding the Playoffs. We have had top teams left out of the final four in the first couple years, but never an undefeated team. 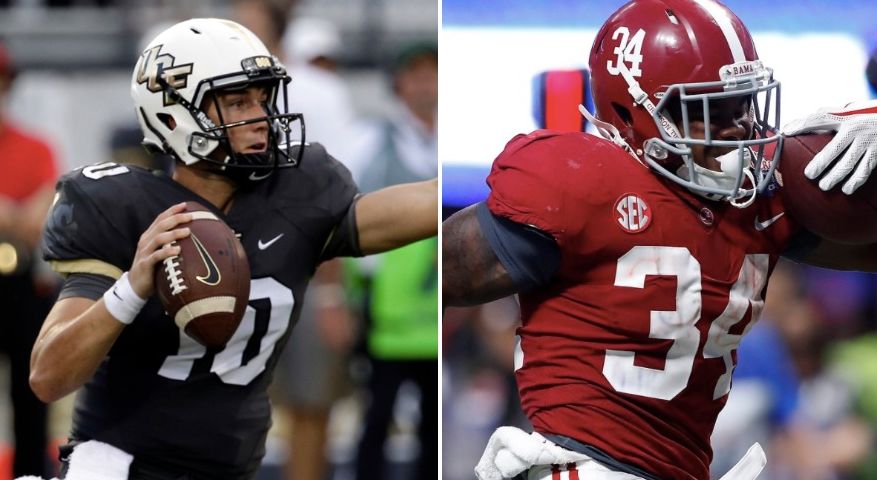 BAMA Vs UCF – The Case for the Underdogs

After years of watching group of 5 teams take a beating form the Power 5 teams, the tides shifted in 2007. That years Fiesta Bowl saw Boise St. take on the overwhelming favorite Oklahoma led by future Hall of Fame running back Adrian Peterson. A game known for it’s amazing finish, we all forgot how much in control Boise St. was going into the 4th quarter. 28-10 late in the 3rd, the Sooners went on a run of 25 unanswered points, seemingly putting the game away. But the Broncos would not quit, forcing overtiming and winning on a trick play for 2.

This started a trend of group of 5 teams coming to a major bowl and beating the favorite. 2009 Boise St. Finished Undefeated, 2010 TCU beat Wisconsin in the Rose Bowl (before the were in the Big 12). 2008 Utah blew out Alabama in the Sugar Bowl. Most recently UCF and Houston have taken it to their respective opponents during there bowl games.

The power 5 conferences will argue that the Knight’s didn’t play anyone of note, and if they were in their conference they wouldn’t have even gotten close. That’s a fair argument to make, but why not see it on the field. UCF defeated 3 ranked teams, including a tough Memphis squad twice, and having a big victory over Big Ten for Maryland and a cancelled game against Georgia Tech. Their schedule was as good as any other team, including Alabama. Bama went 3-1 against ranked teams during the regular season, losing to Auburn to close out the season. Alabama didn’t even get into it’s own conference title game, unlike UCF.

The SEC might make make more money, which normally equals to better teams. But if we started letting this smaller teams into the big festival that is the College Football Playoffs, the tides could begin to shift like they have in basketball. I am all for extending the playoffs and letting into some Group of 5 teams.